Unit testing is a method by which individual units of source code are tested to determine if they are fit for use.

Tests Are Your Best Friends: Do Not Neglect Them

The Business Value of Unit Tests

Why I Write Tests?

Most programmers do not write tests. We all know that we should write them, but for whatever reason, most of us don't. This is unfortunate, because testing is the most powerful tool we know of to improve software quality. Tests reduce bugs, provide accurate documentation, and improve design.

Testing approaches depend on where you are in the project and your “budget,” in terms of time, money, manpower, need, etc. Ideally, unit testing is budgeted into the development process, but realistically, we often encounter existing or legacy programs that have little or no code coverage but must be upgraded or maintained.

This article will present ways to design and refactor code for better testability, and demonstrate how this will influence the tests. The solutions are applicable to code that takes advantage of async and await, as well as code based on lower-level multithreading mechanisms from earlier frameworks and libraries.

The "I have no idea what I'm testing" anti-pattern

There is a pattern I really don't want to see in unit tests. I will call this the I-have-no-idea-what-I-am-testing-anti-pattern. The anti-pattern is easily spotted because the test code itself contains calls to your service locator to resolve interfaces.

To Repository Or NOT

A look at how to unit test code that makes use of Repository vs using raw Entity Framework, where we will do this using mocks/test doubles.

Open letter from an @ignored test

Dear developer, I’ve been wanting to talk to you for a while now, but words don’t always come easy. We’ve had some really fun times together. I still remember the first time I warned you about a minor bug in your code, and how happy you were for having me in your life! Do you remember it? I also remember the first time you refactored me to make me more efficient and how well-written I felt afterwards... ah, great times!

Many guides out there will encourage you to add some lines in your “build.gradle” to enable “instrument tests” and also tell you to include the Android testing libraries in your dependencies… This is completely unnecessary and you won’t need to worry about doing that.

The default test runner for Angular is Karma, which makes sense as it was written by them. There are several options out there for the framework, and I personally prefer using Mocha as it runs on Node.js.

The Ultimate Guide To Unit Testing in ASP.NET MVC

Unit tests are definitely becoming a need-to-have skill for developers to confirm their code does what it should for production.

What exactly is a "unit" in unit testing?

This should be an easy question to answer, right? Turns out that there are several definitions of unit testing, and even though they are similar, they are also different enough that answering this question is difficult.

Most developers seem to agree that testing is good, but developers frequently disagree about how to test.

If you were to take a poll of software development shops and ask whether or not they unit tested, you’d get varied responses. Some would heartily say that they are, and some would sheepishly say that they totally mean to get around to that next year and that they’ve totally been looking into it. In the middle, you’d get a whole lot of responses that amounted to, “it’s complicated.”

Unit tests make it much easier to change our code while making sure we don't change its behavior (refactoring). This means that properly unit tested code can be heavily refactored/cleaned up so if we happen to break existing functionality we'll know instantly by way of failing tests.

Why Most Unit Testing is Waste

Unit testing is of course not just an issue in object-oriented programming, but the combination of object-orientation, agile software development, and a rise in tools and computing power has made it de rigueur.

Unit Tests, How to Write Testable Code and Why it Matters

Unit testing is an essential instrument in the toolbox of any serious software developer. However, it can sometimes be quite difficult to write a good unit test for a particular piece of code. Having difficulty testing their own or someone else’s code, developers often think that their struggles are caused by a lack of some fundamental testing knowledge or secret unit testing techniques.

How just about everyone gets unit testing wrong

Remember that actors interact only using message passing. In order to check actors behavior you can do it through the messages sent to them and back from them. So how do you test actors? You send them messages :) To test actors that communicate only with messages, you need to send it a message and get reply back and check it.

Lean Testing or Why Unit Tests are Worse than You Think

Testing is a controversial topic. People have strong convictions about testing approaches. Test Driven Development is the most prominent example. Clear empirical evidence is missing which invites strong claims.

Introducing the .NET Core Unit Testing Framework (or: Why xUnit?)

Under the hood, the xUnit architecture is also far more extensible than the other Visual Studio test frameworks. You can create new attributes to control tests or extend the Assert class's Equal, NotEqual, Contains, DoesNotContain, InRange and NotInRange methods to provide custom functionality.

Test-driven development is addictive, it works like Facebook and checking your email. It takes a very little effort to get a tiny endorphin kick. Red, and tap-tap-tap, green again. "I'm good!".

How to test software, part I: mocking, stubbing, and contract testing

In this series, I will cover an assortment of testing tools that should be in every developer’s toolbox, and go over when, why, and how to use them.

Every developer knows that the testable code can make life easier. “Good code” and “Unit-testable code” are not always equivalent terms. Your code can be understandable, self-documented, but untestable at the same time. 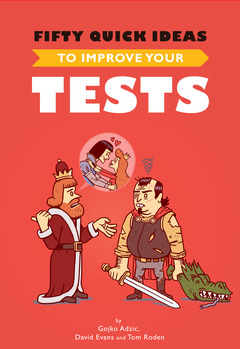